Song of Names Release and Reflections

History is made up of three things:
-what happened
-what evidence got left
-how we choose to tell the story

We would love to get at what happened. But the "what got left" step often gets in the way. The records and monuments that are produced and preserved lean heavily toward telling us what people with power thought of things. Everybody else often gets left way out on their peripheral vision: what happened is as often between as in the lines.

So when we go back to choose how to tell a story, we stand on the shoulders of past bias. It's a lot of extra work to try and tell a story from a different point of view than the ones our records most value. Trust me: I've spent hour after hour just trying to track down the full names of women mentioned in passing, just so that I can write a sentence where they get to be the subject and not just somebody's wife, sister, or ward member.

In Mormon history, the sources tell us a lot more about leaders and missionaries than members of the Church. Ardis Parshall once looked at the indexes of three Mormon histories, published in 1970, 1992, and 2005, and tallied the percent of people mentioned who are female. She found that we've been getting a little better over time:
1970 index: 7% female
1992 index: 8.7% female
2005 index: 15% female

This stuff matters. This stuff matter because the stories we tell set our unconscious associations and expectations. And those expectations become the baseline for our plans.If we don't tell stories about a given group of people, no one thinks to take those people into account in their imagination. And we build a world planned for a too-narrow slice of humanity.

A few years ago, Ardis and I started writing a book together. An ambitious book, that would combine history and poetry to give people a viewed of Mormon history through individual lives as varied as stained glass. We wanted to take the extra research steps and writing steps to get at pieces of the past left out past the edges of our collective memory.

We're officially releasing Song of Names: A Mormon Mosaic today. We'll have a Zoom party tonight. But last night, Ardis and I agreed that the most important legacy will be if this helps show other people that this can be done. That the barriers of how our stories have been told in the past don't need to forever dictate how we get at what actually happened, and that there is enough material out there for us to choose to remember our history and heritage in different and better ways. 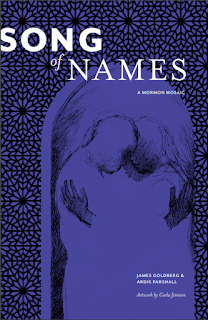