"And lo, he shall suffer temptations, and pain of body, hunger, thirst, and fatigue, even more than man can suffer, except it be unto death; for behold, blood cometh from every pore, so great shall be his anguish for the wickedness and the abominations of his people.
And he shall be called Jesus Christ, the Son of God, the Father of heaven and earth, the Creator of all things from the beginning; and his mother shall be called Mary." (Mosiah 3:7-8)

The first part of this passage is beautiful, but the second part always used to confuse me. I mean, Isaiah gets the name technically wrong but communicates the concept clearly when he talks about "Immanuel," meaning "God with us." And to me, a God who communicates about the future more on the level of metaphor than in exact but meaningless specific terms makes sense. So it didn't make sense to me that God would send an angel to Benjamin with a literally accurate, but largely meaningless, prophecy about names.

For a long time, I figured it just must be the translation. Benjamin said something metaphorical or symbolic, and Joseph Smith translated it to Jesus and Mary because those are the names Joseph Smith knew. But when we went over the passage in Sunday school this year, the same old concern popped into my mind anyway: what would these names possibly have meant to people living long before Christ?

Sometimes I wish that I could just delete a concern as soon as I decide it's not really important instead of having it come up again and again.  Sometime I wish that when something bothers me, I could just decide not to worry about it and that my brain would cooperate and I would never think about it again.

But it's a good thing our brains don't work that way, because this time just as soon as the concern popped into my brain, I realized there's a very cool possible answer. And so I'm glad the concern has stuck with me for over a decade: carrying a quiet little concern for a while is more than worth the insight that comes when the time is right.

Here's what I realized all at once in Sunday school:

"Jesus" is just another way of saying "Joshua." Which did have at least two meanings in the house of Israel long before Jesus was born. The name itself meant "God helps" or "God rescues." But it also would have reminded listeners of the prophet-leader Joshua, who (after their forty years of wandering) led the children of Israel into the promised land. So when King Benjamin says that there's going to be a son of God who comes and suffers, but that through his suffering he will be a greater Joshua, people may have understood the name as meaning that the anointed one wasn't just going to rule in the geographical land of Israel: he was going to lead us to a deeper Promised Land.

"Mary" is the later equivalent of "Miryam." Which literally means "bitter" and might have reminded the people that this Son of God would still have a mother who'd have to watch him suffer. But "Miryam" is also the name of Moses' older sister: the one who followed him down the river to make sure he was safe and who made sure that he'd have his mother as a nurse (and therefore be raised with a knowledge of his identity). That parallel is specifically significant if the people had the idea that the Messiah would simply come down the known Davidic line of succession and live his whole life as a celebrated king. By telling his people that the Messiah's mother would be a Miryam, maybe Benjamin was trying to explain that his identity would be secret. That only through the Miryam-to-come would he know where he really came from, and have the sense of incompleteness that drives the chosen out into the wilderness to search for the divine.

I'm glad I never stopped going to church because I didn't understand why King Benjamin would have given Jesus' and Mary's exact names. But I'm also glad a part of me stayed concerned enough about the issue to finally piece together what a prophecy about the names Joshua and Miryam might have meant to people who lived long before Christ. I didn't technically need that particular answer I suppose, but having the insight suddenly click like it did makes the passage feel more special to me: like the way a dream of God can turn a patch of desert into sacred ground.

It's not good, I think, to let your concerns interfere with your study or keep you from believing in the scriptures. But it is good to have concerns, because the day may come when those concerns burst into insight and make your relationship with the scriptures closer and richer.
Posted by James Goldberg at 9:00 AM 6 comments:

Now, I understand that Mormons aren't the only ones who get stupid, out-of-proportion questions about their faith. Muslims are constantly having to answer about whether this or that passage in the Qur'an makes every Muslim a terrorist. For centuries, Jews have been hassled over whether the Kol Nidre prayer on Yom Kippur means that no Jew can be trusted to keep his word. And so on.

But seriously? We do care about marrying in the faith when possible, or at least marrying someone who treats your faith respectfully. But thanks to the church's growth worldwide and among immigrant communities, interracial, intercultural, multilingual, and international marriages are probably way more common among Mormons these days than among the population at large.

And this is probably hardly news to Mitt Romney. His dad's cousin, my grandma, married an immigrant from India back in 1958, when Arizona law still technically forbade such marriages. What did her dad, Romney's great-uncle, think of that? Well, my grandpa had joined the LDS Church several years before he met my grandma and served faithfully in it. And that was good enough for my grandma's father, who fully supported the marriage.

I have cousins now who are half-Navajo, half-Belgian, half-Japanese, half-English, half-South Indian. All of us are religious Latter-day Saints. 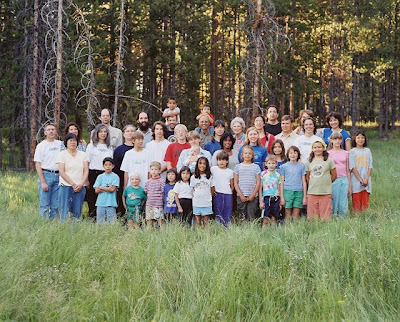 The Gill clan. Yup: all Mormons are definitely closet racists.

The LDS church doesn't track statistics on race (in a worldwide church, whose version of race would you be tracking anyway?), but if you add up the membership per country, it's pretty clear that the majority of Mormons are not white.

So yeah, there are plenty of racist things various Mormons have said, and there are some very racist-sounding things in our scriptures (especially the Bible, which expresses persistent prejudice against Edomites and has a mixed record on Samaritans). But to think that all Mormons are racists in the 21st century? And to harass an individual Mormon about interracial marriage when there's no shortage of multiracial members of the Church?

Please. Just please. Get with the times! If you can do nothing else, at least acknowledge that my cousins and aunts and uncles and I exist...
Posted by James Goldberg at 3:55 PM 15 comments: