Last week, I promised to bring my ten-year-old daughter Kira to work with me at the Church History Library in Salt Lake. She was pretty excited to see my office, but I was pretty sure the excitement would wear off once she realized how incredibly boring it is to watch writers work. So I planned something else.

After she got a chance to check out the office, I asked, would she like to wander around Temple Square on her own?

She thought that sounded lovely. 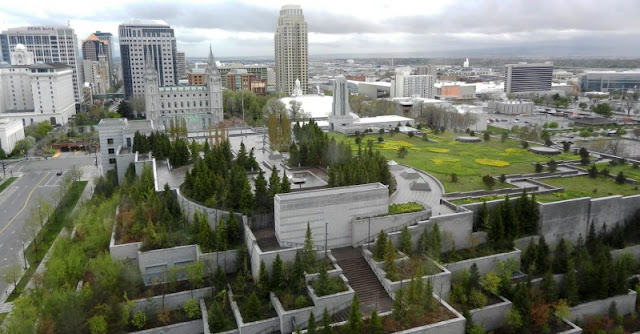 As I started listing places she might want to check out, though, I realized there might be a hang up or two. I remembering loving the native-plant garden on the Conference Center roof, but I wasn't sure the tour guides would let an unaccompanied ten-year-old into their group. Not everyone shares my views on the importance of structured independence in childhood. Letting Kira wander central Salt Lake on her own might raise a few eyebrows.

I decided it would be worth it anyway.

When the day came, I took her out to temple square just after lunch at noon. I took a minute to show her how to use landmarks to find her way back to my office and left her with my cell phone in case she got really lost. And then I went back to work.

She explored for the next four hours. She called a few times with a report ("They did let me into the conference center tour!" "The north visitors' center by the temple is awesome!") and once left a message with a question ("Where exactly is the Beehive House?") which she resolved on her own before I got back to her. She had a great time, and got both a stronger sense of connection to our faith and history and some very tired feet.

I don't know what the right age is for setting a child loose in a downtown historical area. For Kira, ten was plenty old enough. Elijah would love to do the same, but at age four his wandering range is still limited to one side of our block. Maybe when he's eight?

I know there are risks to letting your children wander too far and try out too much when they're still young. But I tend to think that as a culture, we worry too much about those risks and don't think enough about the benefits of helping a kid develop some sense of independence.

In Kira's case, a slowly-growing "home range" of space she could wander without supervision has been important since she was five or so. Longer walks and trips to the grocery store where she led and I just followed helped her figure out how to navigate and make decisions while still feeling supported. And then things like using Google maps to help her figure out how to get to friends' houses a few blocks away rather than just driving her helped.

She still doesn't wander as far in the neighborhood as I did when I was a kid, back in the days when it was normal for kids to just take off on bikes and come back by dinner. But then again, nobody set me loose on temple square or gave me money to go buy ice cream on my own, either.

I read about a study once that showed adult American men have a stronger sense of direction than adult American women because in our generations, boys were typically allowed to wander farther than girls (girls who did wander a lot as young children typically had stronger senses of direction). I haven't looked for studies on other skills: do ten-year-olds who have to interact with cashiers develop stronger social skills? Do early childhood educational experiences have more staying power when kids have to find their way to the experience on their own? My guess is that there's some sort of benefit.

So where's the balance between safety and development? What is it wise to expect/allow from a 4, 6, 8, 10, or 12 year old? What tricks do you have for preparing your own children for independent experiences?

I think this is something we need to think more and talk more about.

Update: on a Facebook discussion of this post, someone asked about laws for leaving children on their own. In Utah, there is no legal age set. The Children's Service Society has a helpful checklist for deciding when to leave kids at home on their own and how to prepare them for a positive experience. With some modifications, I'd imagine a similar preparation and evaluation process applies to helping your kids safely navigate a public space on their own at a reasonable age.
Posted by James Goldberg at 11:41 AM 3 comments: