Reza Aslan's "Zealot" and "The Five Books of Jesus"

It was the Fox News interview that drew my attention to Reza Aslan's new book Zealot: The Life and Times of Jesus of Nazareth.

"You're a Muslim," asks Lauren Greene as she opens the interview, "so why did you write a book about the founder of Christianity?"

Now: if Aslan had been writing from a religious Muslim perspective, he might have said, "Because Jesus is also a sacred figure in Islam," or "Because I think my Islamic values help me see some things in  the gospels many modern Christians miss."

But Aslan did not write the book from a religious Muslim perspective. Aslan wrote unabashedly as a modern academic in the humanities, which means that his assumptions owe more to Marx than Muhammad.  "My book [contradicts] pretty much everything Islam believes about Jesus as well,"he tells Greene.

But Greene still can't get over the Muslim thing. She has to know why Reza wants to write about a major historical figure. "I'm a scholar," Aslan explains to Lauren Greene, "I get paid for this." And then he explains it again, more slowly. And then again, because she's been checking instant messages about what a dangerous crypto-Muslim he is instead of listening.

Now, just because Aslan is a scholar doesn't mean he's right. Though he goes on at some length about the number of sources he's consulted, Aslan still emphasizes that historical scholarship consists mostly of debates between well-read people over ancient events and figures. Jesus scholarship, in particular, involves a lot of conjecture and debate.

I haven't finished Zealot yet, but having read the beginning and several literary reviews that sum up its main arguments, and having researched and written my own Jesus novel, I want weigh in on four points Aslan seems to be making in his #1 Amazon bestseller. 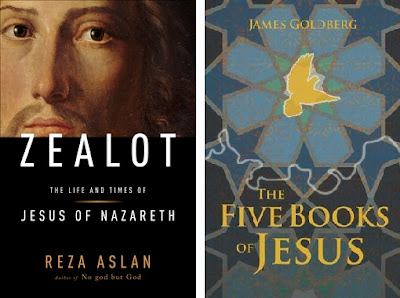 In Aslan's description of Jesus' world, brutality is common enough to feel almost banal. Judea and Galilee are awash in apocalyptic thought and deep-rooted, burning resentment of the Romans. Divisions run deep between ethnic, religious, and political groups.

This is not your typical Jesus and lamb painting. In this world, the shepherd boys travel armed and shoot first if you get too close.  In this world, people who want to live watch their tongues.

Both Aslan and I agree on these essentials of the regional background. Jesus lived in the sort of times that produce the men who become legendary freedom fighters or hated terrorists (largely depending on whether they win or lose). Jesus walked down roads where dirt regularly mixed with blood.

Zealot Point #2: We can know the historical Jesus by considering what would have been typical in his world.

Starting from this setting, Reza Aslan borrows an old distinction between Jesus of Nazareth (the historical figure) and Jesus the Christ (the religious figure). Like German researchers in the 19th century, he wants to strip the Christ of faith from the gospels to find Jesus the man. And he believes that studying typical Jewish life in Jesus' time and place will help him know who Jesus really was.

I'm not sure I buy that basic assumption. For one thing, Aslan may be overestimating how much we can say about Jesus' time and place--one review points out he uses a source from the 180s CE as if it were contemporary with Jesus. For all the Roman documents and archeological digs that have been done, our sense of everyday life way back then isn't all that precise.

More importantly, though, I'm not convinced that studying a cultural pattern can really help us pinpoint an individual person. Would we reject 1890s Mormon sources on Joseph Smith whenever they don't match the broad patterns of a Second Great Awakening preacher or visionary? I hope not. Because we'd end up with a view of Joseph Smith that does nothing to explain Mormonism's difference from other movements. And yet Aslan seems prepared to throw out any parts of the gospels that suggest Jesus was different than any other murdered Messianic revolutionary in his century. He tries to project that broad pattern onto the individual person.

Which is a little bit, come to think of it, like Lauren Greene trying to discover the real, concealed Reza Aslan based on what she knows about tensions between America and radical Islam in the 21st century. If we are willing to say that Jesus was a typical apocalyptic revolutionary because he came from a violent time in Galilean history, why not say that Reza Aslan is a fierce anti-American because he was born in a turbulent Iran?

I guess my approach to Aslan is to focus on how his thought plays out in his books rather than to analyze him primarily through the lens of broad trends in his place and time. Even today, the tools of history can't necessarily tell us what a person was really thinking. But they can help us understand what they wrote.

A fundamental difference between Zealot and The Five Books of Jesus is that Aslan tries to use historical tools to find the historical truths the gospels hide, whereas I try to use historical tools to understand what the gospels were saying to people in a culture we've largely forgotten. While Aslan looks primarily for a Jesus who was a typical Jewish revolutionary of the era (with missing archetype DNA borrowed from revolutionaries of subsequent eras), I look for what made the Jesus Christ of the gospels (whether or not he's also the Jesus of History) so much more compelling to people of the time than all the other prophets, mystics, and miracle workers they had stories of.

In the end, the difference may be in which part of Jesus we think is missing. Both Aslan and I want to look beyond the Christ of contemporary faith--but I think the Jesus Christ of the gospels is even more surprising and unexpected than any historical image of Jesus a scholar can construct.

Zealot Point #3: Pilate was a jerk. And the gospels soft-pedal that.

Speaking about endless pages of footnotes and the Romans' penchant for record-keeping might give the false impression  that we can look up detailed information on Pilate in an old government file. So far as I know, what we know about Pilate outside the gospels is that the Roman-employed Jewish historian Josephus and the Hellenized Jewish philosopher Philo didn't care for him. Both cited his cruelty and incompetence in explanations of later Jewish revolutionary violence.

In other words, there's tension between the softer Pilate of the gospel accounts and the brutal, arrogant Pilate of Jewish accounts. Both have ulterior motives: the Jewish historians are looking for low-ranking fall guys to blame the Jewish revolt on so authorities won't blame the entire Jewish community. The gospels are trying to communicate a radical message about God's order without getting mistaken for run-of-the-mill revolutionary propaganda.

Whose version of Pilate do you believe?

Both Aslan and I opt for the "Pilate was a jerk" view of classical Jewish writers. Aslan does so not because it's proven, but because it sounds more natural in a volatile province to punish first and ask questions later than to agonize over a fairly routine execution. The Five Books of Jesus features a cruel Pilate because I think that view helps a modern reader see in the gospels what a contemporary listener or reader likely knew without being told: that rulers are not tame. And that trials come down to the whim of a hostile stranger (rather than the procedural protections we might imagine reading from America's twenty-first century).

Aslan seems to believe that the likely soft-pedaling on Pilate is evidence of a larger pattern: that the gospels were written for assimilated Roman citizens largely at peace with the Empire.

As someone who has studied the allusions and rhetorical strategies of the gospels, it's hard for me to agree. If the gospels were written to serve happily assimilated Romans, they did a pretty bad job.

The gospels, especially the synoptic gospels, rely on readers' knowledge of Jewish prophecy and precedent to deliver their core messages. They constantly allude to the Hebrew Bible's motif of the kingdom of God ultimately smashing the kingdoms of the earth to pieces. They leave out the cosmopolitan cities of Galilee--places like Sepphoris and Tiberias--which would have been the perfect locations for pro-Roman scenes, and focus on traditional Jewish farming and fishing villages instead.

If they were so focused on helping Gentiles and assimilated Jews feel good about themselves and the Empire, why did they leave so much kingdom theology in their accounts?

The Christian community that developed after Jesus certainly differed from the Kingdom of God movement he developed in his lifetime, but I think scholars like Aslan underestimate the overlap between the two. Paul's thought is apocalyptic just as surely as Jesus' is--and for all his outreach to Gentiles, it matters a great deal to him to see converts as transformed into descendants of Abraham. The gospel writers still seem to be waiting for a day when the apostles rule over a restored House of Israel. And the gospels' view of Atonement owes far more to Yom Kippur imagery and psalms in their narratives of Jesus' death than they do to pagan views of the relationship between men and the gods.

And though my book may never find nearly as many readers as Aslan's, that's exactly what The Five Books of Jesus delivers and Zealot seems to lack.

If you want a sociologist's conjectures about the typical sort of figure 1st century Galilee might have produced, with some added thoughts on the religion some Romans might have made out of him, read Zealot. But if you want to understand what the gospels might have meant to people with an intense longing for another way of living and with "ears to hear" a message which remains revolutionary, make the time for a good, careful read of The Five Books of Jesus.

Note: The Five Books of Jesus is available in print or eBook forms through Amazon. To celebrate the recent surge of interest in Jesus and history around Zealot, I'll be setting the eBook price to free this Thursday through Saturday.
Posted by James Goldberg at 11:08 AM 5 comments: Links to this post