Phoenix Song: An Introduction and Some Thanks

I published my second collection of poetry last week. It's called Phoenix Song.

I really like the cover. The designer, Emir Orucevic, did a great job coming up with imagery that lets you feel the ash even as you watch the phoenix rise. 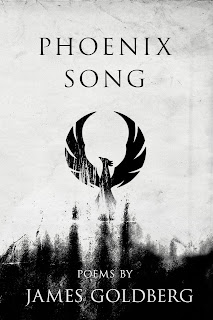 I haven't figured out yet quite how to talk about the book, except to say in general terms that it matches the cover. I started writing the poems that later found their way into the collection in the fall of 2015, when I'd just gotten the diagnosis of a cancer relapse, and in the years since I've done some burning and rising and thought a lot about the process.

The poems that came out of that vary a lot, though. Two of the book's ten sections are overtly about chemotherapy. There's also a section made up entirely of true stories from my own recent experience at Church as part of a ward. And there are some direct responses to recent events in terms of treatment of migrants, etc. But sometimes, to wrap my head around our reality, I had to bend it or transcend it: there's also a section of alternate histories, a section with a poem exploring each of the virtues listed in D&C 4, and several pieces right along the line between poem and prayer.

I didn't draft an introduction or end notes to this book, which was a mistake. I owe thanks to a lot of people for this work. Of course, I owe a lot to my immediate and extended family, who helped me through the last few years, and to my wife, Nicole Wilkes Goldberg and brother, Mattathias Singh Goldberg Westwood, who helped review drafts and kept me company through the really boring publication prep part of the process.

I also owe some specific thanks to members of the Mormon Lit community for giving me occasions to produce.
Eric (aka Theric) Jepson once invited me to do a simple devotional poem exchange, where we each came up with one piece to send to the other person. Mine was "Reach for Me."  Theric also shared a call for submissions for a Jewish alternative history anthology. That project never came to fruition, but two really strong poems in this collection come from his willingness to think of me and pass on that challenge.
This May, Darlene Young organized an event called "MoPoWriMo" (Mormon Poetry Writing Month) where a group of us committed to write a Mormon poem every day for a month. I think I made it to 27 out of 31...some of those were not great, but many others are included here. I doubt the collection would have come together without Darlene's challenge and organizational work.
And the closing poem comes from my review of William Morris's short story collection Dark Watch and Other Mormon-American Stories. I don't normally resort to poetic imagery in book reviews , but William's work has helped call my generation of Mormon literary writers to a higher standard, so I'm kinda not surprised that happened.
Posted by James Goldberg at 8:19 AM