"Behold, I am God and have spoken it; these commandments are of me, and were given unto my servants in their weakness, after the manner of their language, that they might come to understanding."

I talked to an agent for Deseret Book several months ago about the possibility of publishing an additional illustrated version of the Book of Mormon, in which the characters were anthropomorphized people-animals (a la, for example, Brian Jacques novels) rather than people. I suggested this partly just because my brother used to draw Book of Mormon characters that way, and partly because I thought obviously imaginary renderings like that would free up children to visualize characters on their own and solve the problem of children taking problematic existing depictions literally.

The group I was with was excited about the proposal, but the agent was not. He said that customers are pretty sensitive about what they get in terms of religious depictions and was pessimisstic about the ability of such a work to sell.

If I were to re-pitch a similar concept today, though--and I probably should--I would frame it as a "kids illustrate Book of Mormon stories" project and incorporate a variety of styles coming from actual young artists around the world. D&C 1: 24, I think, provides an appropriate justification: giving children a chance to receive these stories in the manner of their own language might help them come more quickly and organically to meaningful understanding.

To give you a flavor of such a work, I present the following three drawings by Braden and Franklin, two of my own primary students. 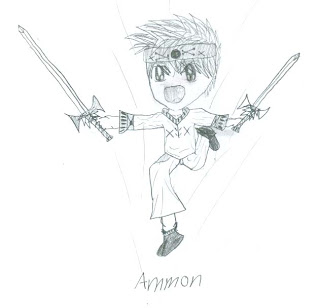 Braden loves Ammon, and it shows. 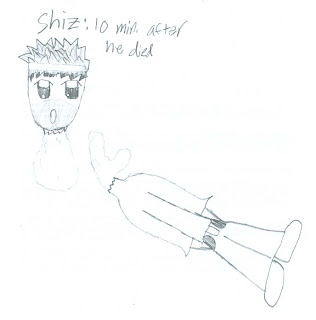 One Sunday the boys had a heated discussion on the topic: "Who would you have joined: Coriantumr or Shiz?" Franklin has been fascinated with that story every since. (Tangential note: Gabe insisted he would've hidden in a rock to avoid the war. The other boys told him that Coriantumr and Shiz were sweeping the land to force everyone to fight, and that Gabe, lacking a prophet's protection, would have been found and forced to fight. Gabe responded that he would have hidden in Ether's rock, taking quite literally the sentiment that we should follow the prophet.) 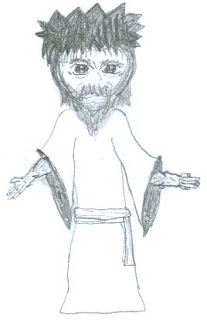 This last one is Braden's. It's Jesus, I think during his visit to the Nephites (I also think Braden meant to draw feet, but ran out of time). I prefer this Jesus's wrinkled face and intense gaze to the glowing Jesus of of the Simon Dewey and Greg Olson paintings that seem to dominate the LDS market at the moment. The manner of Braden's language has more power for me.