On the Mormon Lit Blitz Facebook group, we're currently running a bracket challenge called "August Insanity." Basically, we've pitted sixteen works of Mormon Lit against each other in a fight for glory, which I've described here. (Sidenote: I swear it is pure coincidence that both urls I've linked to so far end in 666.)

Anyway, I just gave my nine-year-old daughter brief plot synopses of each work and she just filled out her bracket: 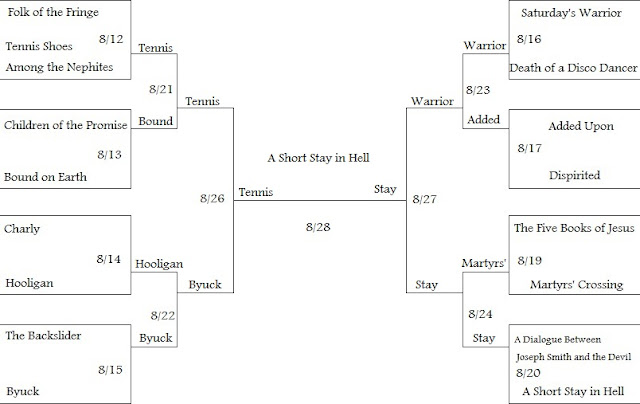 For the first round, I also wrote down her justifications for each first round choice:

A brief plot synopsis of Bound on Earth impresses Kira “because I think you can, like, learn lessons from there.”

She has a tougher time with the next match but chooses Hooligan over Charly: “I like the idea of Charly, but she dies.”

Though she's intrigued by Jesus appearing to someone in the form of a cowboy, she chooses Byuck “because Byuck has one of my favorite college schools because my parents teach there.”

When I mistakenly tell her that Death of a Disco Dancer is about a boy whose grandmother's ghost comes to visit him, she leans toward it. But when we look up a synopsis and discover the grandmother is (disappointingly) still alive, she switches sides and chooses Saturday’s Warrior “because it’s like an eternal family. And I like eternal families.”

She goes for Added Upon “because the other one sounds kind of spooky.” Sorry, Luisa!

And then comes the bombshell. Her initial enthusiasm at seeing my book on the list is quickly dwarfed by the excitement of finding out its opponent is by Mel Larson! After a plot synopsis of
Martyrs’ Crossing, I have to come to terms with elimination in the first round on my own daughter's bracket. Why? Why Martyrs' Crossing?  “Because it’s by one of my daddy’s favorite friends and it sounds interesting because they are spirits and stuff," she says. "And I like the other one my dad wrote, too.” Thanks, Kira.

In another surprise, she chooses A Short Stay in Hell over her ancestor's classic dialogue, “because it has a library and I like to read.”

After the first round, she doesn't seem to do much head-to-head comparison of the books. Her cousin's coolness outweighs learning lessons in the second round and her parents' workplace in the semi-final.

But even the aura of coolness around Tennis Shoes leave it short of victory. Kira picks A Short Stay in Hell to win it all "'cause the guy is stuck in a library!"

Guess I can't be too upset about my own book going down in the first round when her bracket ends with such a lovely justification.

Good luck to all the competitors in the real tournament--and congratulations to Steven Peck for making it to the top of my daughter's bracket.
Posted by James Goldberg at 1:56 PM