"Ye shall do no unrighteousness in judgment, in meteyard, in weight, or in measure." (Lev 19:35) 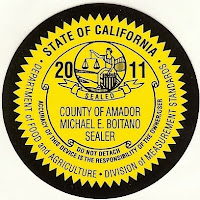 There are recurring warnings throughout the Old Testament against cheating in the way you measure. And it's easy to see how, before the rise of routine government oversight, problems with measurement would have been common. The person in control of the scale has a clear motive to understate the weight of the goods he or she buys and to overstate the weight of the goods he or she sells. And a person without a scale is probably poor enough not to have a lot of bargaining room.

The great sin of mis-measurement, I think, was that it held vulnerable people accountable to a distorted version of reality more powerful people established.

In our days, fortunately, fixed scales and fraudulent yardsticks are rare--partly because government inspectors are common.

And yet...are we really living up to the commandment to measure in righteousness?

I saw a news report recently on the crowding Louisiana's prisons. The state has the highest incarceration rate in the world: five times more prisoners per capita than Iran, thirteen times more than China. Why? Primarily because Louisiana pays local sheriffs to run their own prisons. They've chosen to measure success by the number of full prison beds, and the vulnerable are paying the price for that decision.

I talked last week with a reservist who'd been trained as part of a U.S. army civil  affairs unit. In his training, he was taught to consider how a proposed development project might affect the local economy in the short and long term, trained to estimate multiple consequences of the project based on local context. When he arrived in Afghanistan, though, he learned that the area command had been given to Naval officers because they needed a command to qualify for career advancement, while civil affairs officers did not. And he saw the significant problems that had been caused by ill-advised projects during a period when the military used the number of aid dollars spent to measure unit productivity. Commanders with little background in careful project evaluation were expected to go out and act busy and often risked lives on projects without accurately measuring their value first. Soldiers died to protect work that only looked good on a military stats sheet. Once again, the vulnerable paid the price for a bad system of measurement.

Another friend of mine, a wonderful elementary school teacher, left his job at the end of this school year last week. He'd realized he was ready to give up during a training on how to administer a timed reading test to his second graders. "What if they stop reading to ask a question," he'd asked the state trainer, "can we stop the time until they start reading again?"

"No," said the trainer. "They need to learn to stay on task."

My friend didn't press the issue then, but what he told me later was this: "We're going to teach a lot of kids how to read, but we're also going to teach them to hate reading."

We keep inspiring teachers to do one thing, then measuring them based on how well they do something else entirely. We keeping asking children to learn, but measure their ability to shut up and focus rather than their capacity for wonder. Will a whole generation pay the price for the way we now measure?

I don't believe in a hell that lasts forever, but if there's a temporary hell where they ask you the wrong questions, where they claim you're unfit for eternal growth because of the test scores you got or the amount of money you made, because you jaywalked in New Orleans or couldn't fill up a stats sheet right...I tell you, even the thought of a bureaucratic hell like that is enough to scare me straight for the rest of my life.

I won't be perfect, of course, but I promise you all today I'm going to think hard about how I'm measuring. Because Jesus himself warned us that "with what measure ye mete, it shall be measured to you again."

When I'm about to die, I don't want to see that as a curse. I want to be able to feel like it's a beautiful promise.
Posted by James Goldberg at 10:22 PM