"No man can serve two masters: for either he will hate the one, and love the other; or else he will hold to the one, and despise the other. Ye cannot serve God and mammon [money]."(Matt 6: 24)

I once read a Hugh Nibley essay that warned, among other things, against seeing rebellious youth as more sinful than the socially-respectable men in suits working hard for "power and gain." In other words: we ought to be more alarmed by the yuppie than by the hippie, even more concerned about greed than about lust.

When I read the essay, I felt strongly that Brother Nibley was onto something: the Book of Mormon warns again and again against pride, especially pride based in material wealth. If it's really written for "our day," as we're so fond of saying, then economic sin is the kind we need to most carefully guard against.

I've been thinking about that article again since I ran across this image on the new media news-site Mashable (unlike many images I'm concerned about, I actually feel comfortable posting this one on my blog): 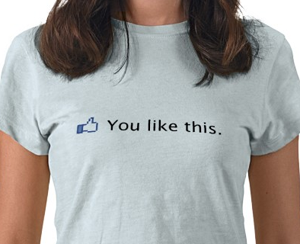 The image is actually quite clever: it takes a recently-minted Facebook icon which is spreading across the web and recontextualizes it in a way that is unexpected and humorous (and by extension, memorable). It's great new media design.

I think it's also fairly troubling.

This isn't the first ad or promotional image I've seen that tries to draw attention to a woman's breasts and doesn't even show her face. It's certainly not the first image that takes sexual attraction out of a normal life context, or that treats it, effectively, as a commodity--an entertainment experience, as it were, for a consumer base.

Thinking about pictures like this one, I'm more and more convinced that divisions between greed and lust are evaporating in our society. The decontextualization and commodification of sexuality in our contemporary, image-driven consumer culture are serious causes for alarm because they show the extent to which Mammon is infiltrating every aspect of life. It was bad enough when lust was a deadly sin. Now it's also a product, and part of a product-mentality that is bad, bad, bad (at least according to Jesus) for our souls.

I'm also more and more convinced that I've been wrong, over the years, to think of corporate execs with fancy cars and McMansions as being unique symbols of the worship of Mammon. The average American consumer, I think, is capable of an amazing amount of Mammon worship without ever noticing that something is wrong. We are all poster children for the money cult. We're all sell-outs to a system that isn't getting any less wrong.

We've got to find a way to live less as consumers and more as brothers and sisters if we're going to keep calling ourselves religious. That's no easy task, though, in a world that sees itself in products and has gotten very, very good at hiding the true costs.
Posted by James Goldberg at 3:09 PM